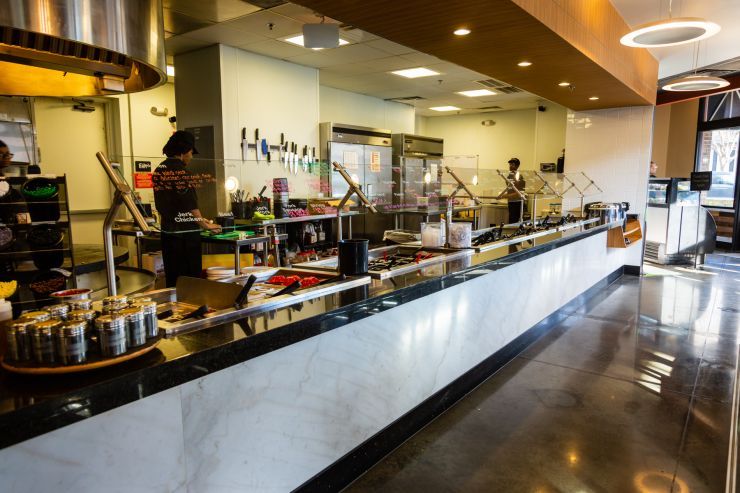 We've been here several times when it was Chow Baby and we liked it.  We tried it for the first time yesterday after the name changed to My Stir Fry.  The restaurant is more or less the same thing whereas you chose your own ingredients and they make it for you.

I have to say that based on our experience yesterday, we probably won't go back.  The restaurant was more or less empty, and the service could not have been any worse.  It took at least 10-15 minutes for them to cook our food each time we went up (twice), which is ridiculous.  The food tasted meh, but let me tell you, by looking at the meats the had available, I was surprised we didn't get food poisoning.  First off, the steak was terrible.  There was more fat and the "silver skin" (epimysium) than edible meat.  My wife actually tried it and it was brought to her so burnt that it was like eating shoe leather with teriyaki sauce.  It was inedible.  We very hesitantly tried the chicken.  I know that when it sits in a pool of chicken juice for a while, it's going to get a little slimy, but this was really gross.  When you picked up the chicken it was like a long string of cheese was attached to it, but it was coagulated chicken juice.  It was quite nasty to look at but we hoped the grill would take care of the bad things.  After it was cooked, it wasn't terrible, but it was far from good.

The service is what really made the visit a bad visit. There were only two people in the front of the house and I think one of them was the manager, giving that he was at the bar working on some numbers or whatever he was doing.  HE made the experience terrible.  His attitude was miserable and he made us feel unwelcome from the moment we sat down.  He threw the silverware setups at us and said the waitress would explain the rest.  It was very cold and clearly he was having a bad day and taking it out on us.  That or he just hates his job or his life.  No matter the cause, he has no business being in front of customers.  He's a creepy old man and was checking out the only only other customers in the dining room every time they walked by.  He was very obvious about it made my wife uncomfortable.

All in all it was a bad experience.  The bill was $35 for two of on for Sunday lunch.  The value was nowhere near what it should have been.  We would have gotten more food but since it took so long to cook, we decided we'd rather leave.  I'm not sure if we'll be back or not.

Galeto Brazilian Steakhouse: Would you like some bacon wrapped chicken?