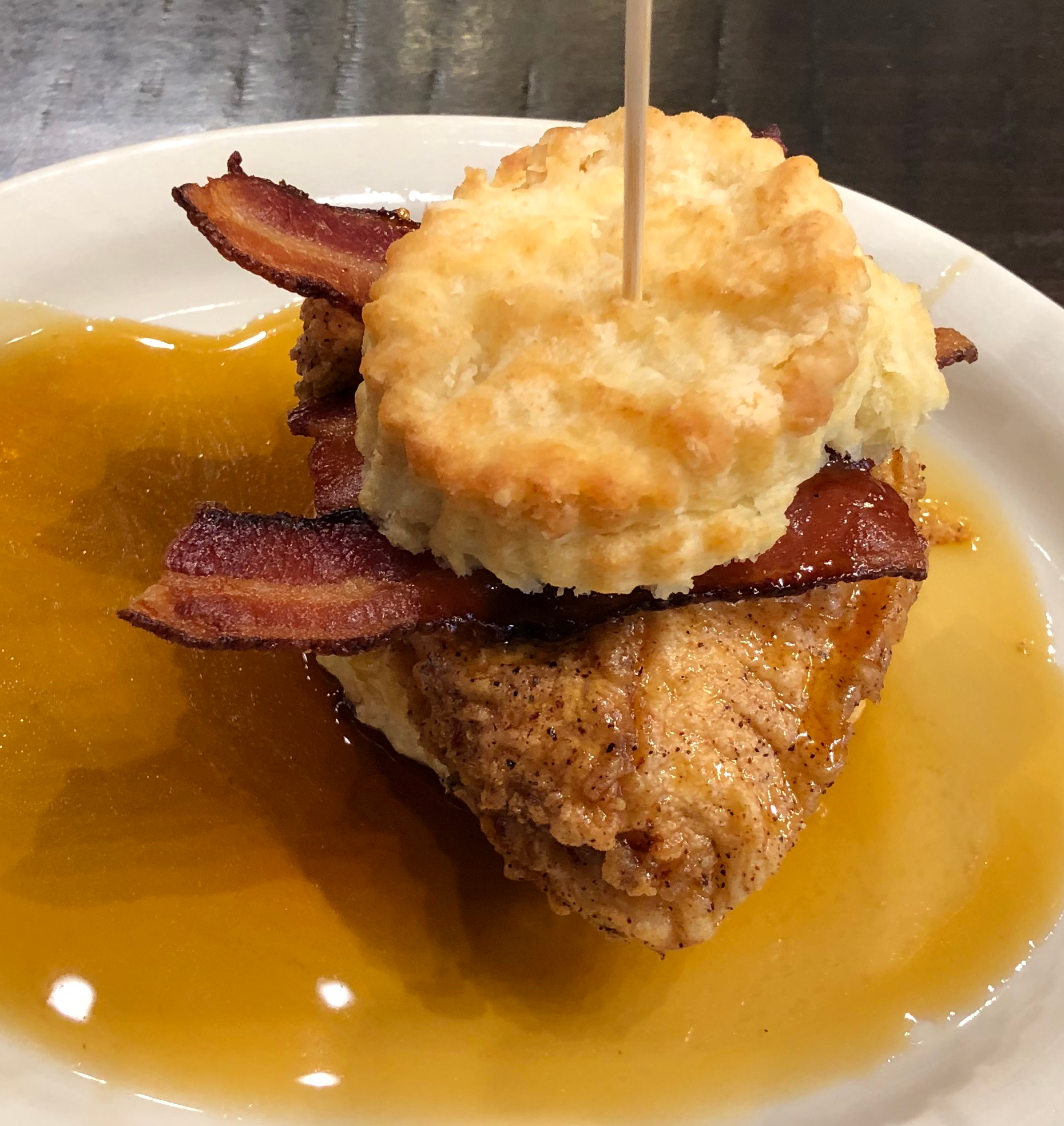 TLDR: Would I drive by a McDonalds or Burger King to go to Maple Street Biscuit Company? Yes! What about Chik-fil-A? No!

When I first read about Maple Street Biscuit Company, I got very excited. I mean, it's fried chicken and biscuits with maple syrup! It sounds great. Add bacon? Yummm. I was looking forward to enjoying what I thought had the potential to be my new favorite breakfast place. I even got Leslie and our daughter very excited to try it out. We planned our Sunday festivities with a scrumptious breakfast / brunch consisting of biscuits, fried chicken, and lots of maple syrup.

The day was off to a great start until we found a place to park in the now bustling downtown Alpharetta, walked around the block in the beautiful morning sunshine, rounded the corner and I opened the door for my wife--- NOT! Nope. Denied. Closed on Sundays! WTF!?!

Seriously, closed on Sundays??? Okay I get you serve fried chicken as one of your main things. I get that you put that fried chicken in a biscuit. But you're a small chain. You're not Chik-fil-A. And you're what? Closed on Sundays? You're idiots, is what you are! I mean give me a break! Man, that was a frustrating and bad first impression. Perhaps it's not their fault and I just got my expectations up too much, but it was quite a let down.

Fine. It's now Monday, and I really wanted to try their food. So I went back that morning. I finally got to try my new yummy biscuit. Hallelujah, the day has come! After looking at a surprisingly large and more-complicated-than-necessary menu, I settled on what I've been mentioning this entire time: a fried chicken biscuit with bacon and maple syrup. WELL, I have to tell you: waaaah wwaaah wwoooouuuuuuuuhhhh. What a total disappointment! Again, perhaps my expectations were too high, but damn, I was looking forward to an orgasm in my mouth, and that's not what I got. It wasn't bad by any stretch of the imagination, but it just wasn't... good. It was a bland and, quite frankly, had too much maple syrup. It know that's an oxymoron, but ya, there was too much syrup.

Anyway, I figured I owed it to my wife and daughter to bring them back, and I did. The experience was repeated and it was a let down. To be fair, Leslie liked hers better than I liked mine, but I still thought it was mediocre. I'd be happy to eat there again, but I'll not be going out of my way to go there.

Oh yes, the service was a little off too. The girl who took my order both times was barley old enough to be in high school, and man did she have a snotty little "like, I don't even know why I'm like here" attitude. I was very unimpressed with how I was greeted on my inaugural and subsequent visits.

And the woman who appeared to be the owner or manager wasn't that much better. She had an attitude like she was Gwynne Shotwell (president of SpaceX) but I was like- lady, you're making biscuits... relax. Anyway, her cold holier-than-thou attitude was repented both times when she brought us free dessert biscuits. I thought that was very nice of her on both occasions and I appreciated her marketing efforts. The problem is the dessert biscuits sucked. They were cold and not really all that good. Again, they weren't totally bad, but I'd never pay for one and I certainly don't think Cinnabon has much to worry about in that regard.

So as I said, Maple Street Biscuit Company is okay. It's mediocre at best. I'd be very happy to drive past a McDonalds or Burger King to enjoy a fried chicken biscuit bathing in a pool of maple syrup, but I'd never be caught dead passing a Chik-Fil-A for one.

Check them out here: https://maplestreetbiscuits.com/